On Sunday at 6.30am, a small team of crack shots gathered by the School’s armoury to get ready for the 11th Infantry Brigade’s annual 7.62 shooting competition held at a small range near Guilford. CWO Callum Davis (Lower Sixth) has reported on the day below.

‘This was to be the opening shoot of the summer season and we were in it to win. After loading up the minibus with rifles, scopes and mats, we set off for Ash Ranges at Pirbright. Arriving in good time we were to commence the first set of shooting at 9.30am, this shoot was a 50-minute sighting practice at 300-metres, the sound of nearby church bells marked the start of the shoot. We shot quickly, not focusing on scores but only on getting in the middle of the target.

The format we were to shoot at the 300-metre and 500-metre firing points was two and seven, which means two sighters, that you can convert to scoring shots, and seven shots to score, minus any sighter we converted. At 600-metres, we would shoot a more difficult two and ten. The target is made up of five rings: two, three, four, five and V (this would score 5.1 points) and for missing the target, but still hitting the board, you are awarded a score of one.

After this warm-up shoot, we regrouped and prepped our rifles and ammunition for the start of the competition. With myself coaching, we started off with Sgt Daniel Wild (Lower Sixth), a strong opener and a reliable shot, who scored an impressive score of 33 out of a maximum possible 35.7. Next up it was Lance Cpl Filip Rivanenok (Fourth Form) who has a skill similar to the top marksmen at such an early stage in his career, who maintained the momentum we needed to continue and scored a solid 28. At this point, the coaches switched to Sgt Wild as Sgt James Gardener (Lower SIxth), a fresh face to the team and keen to make a permanent spot on the team, stepped to the mat and opened with an incredible 34. Finally, it was my turn to shoot, the wind started to pick up and became less predictable, but with some excellent coaching, I scored a decent 30.

After lugging our kit back to the 500-metre firing point, adjusting our sights for the extended range and many double checks, we were ready to commence at the further distance. With the same firing order, Daniel scored 32.1, Filip gained 33.2 points, James made an astonishing 35.3, and I scored 32.2.

Now was the real test, between the now blazing heat, the long-distance and the standard-issue ham and cheese sandwiches we had scoffed, it was now time to put all behind us and focus on the day’s toughest challenge – the 600-metre shoot. This distance is often considered to be the toughest due to the relatively small target and the wind having an adverse effect on the firer’s ability to score well. With some thorough preparations, we could only concentrate as the wind came up and we dealt with the, now not inconsiderable, heat haze. It was all down to the shooters to get the results, whilst struggling with the heat mirage, Sgt Wild scored a frustrating 34.2 out of a possible 50.10, whilst Filip raised our hopes with a cracking 43.2. This was followed by Sgt Gardener shooting an uncharacteristic 38.1. Shooting last and knowing the previous scores were a little lacklustre if we were to secure the trophy, I knew I had to shoot well. I was relieved to finish the day with a 45.2.

After doing a declaration and packing up the minibus, we attended the prize giving. With the second-place CCF team from Cranleigh getting 319.5, we found we had won the CCF side with a whopping 418.5. Next was the announcement of the best shot of the meet, I received the medal with a score of 107.4 (narrowly beating my teammates). Finally, it was to be the coveted overall team shield, and fortunately we beat the Army Cadet Forces strongest team to take home the shield and another victory for the Shooting team.

With special thanks to Cdt Harry Worrell (Fourth Form) and Cdt Derin Tekeli (Third Form) for sacrificing their Sunday to push the targets up and down for us in the range butts – without them, the whole trip could not have happened. We would also like to thank the people who came and watch us shoot and for supporting us at these competitions and, of course, Major Prem and Flt Lt Westlake for giving so generously of their time to organise and attend the event.’ 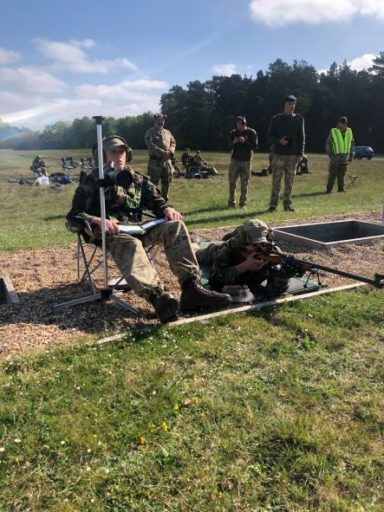 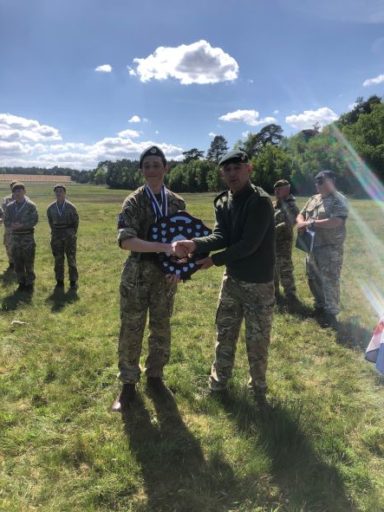 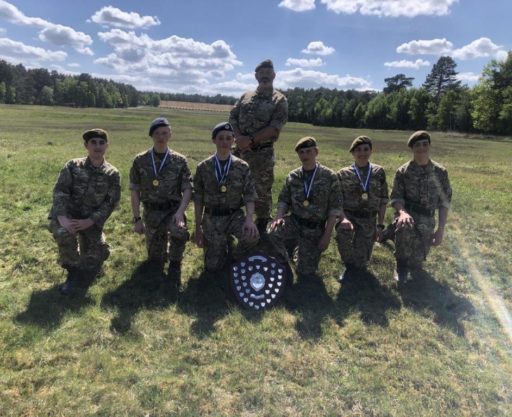