In the following prefect piece, Sophie E (Year 6) talks about her experience with adolescent idiopathic scoliosis:

Back in November 2021, my aunty noticed I might have a problem with my back. I had x-rays and an MRI scan, and in December 2021, I was diagnosed with adolescent idiopathic scoliosis. This resulted in an ‘S’ curve in my spine, the thoracic curve (top of the back) at 64° and the lumbar curve (bottom of the back) at 50°.

Everything happened quickly and, due to the aggressiveness of my curve, on March 15th I went to the hospital for a new procedure called VBT (vertebral body tethering). I am number 15 of 38 children trialling this new procedure in the UK. I felt scared and anxious at the beginning, but after speaking with the doctors and nurses, I felt more comfortable. I also knew I had to have the operation sooner rather than later to stop my spine from becoming worse, resulting in having to have an operation called ‘spinal fusion’. This operation would have meant I would not grow any taller.

I was in the hospital for two weeks and my first operation took six hours, with the second being a week later, also lasting six hours. I now have 17 titanium screws in my spine with 16 wire rope tethers. The combination of the tethers and screws will continuedly pull my spine straight whilst I am growing. I am still a bit stiff and achy, but my scars are healing well, and I am back to School with my friends and have just started back with my horse-riding again. This has taught me how brave I am and that even when times are hard, we can all come through and do far more than we realise we can. The big question is – will the alarms go off when I go through security at the airport? 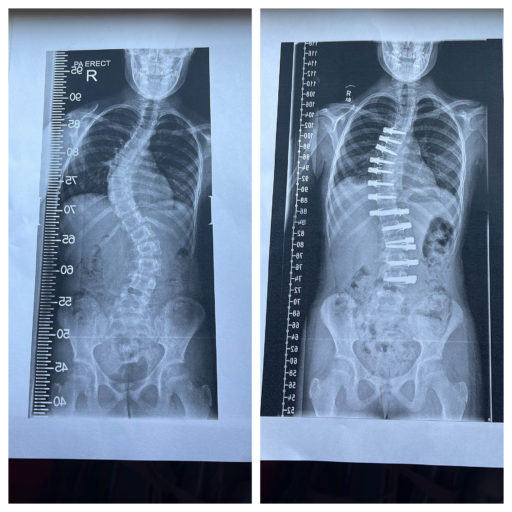