Our Year 4 pupils have used their Super Hoot power of looking skills to analyse the paintings of the artist L.S Lowry. They have identified his use of foreground, middle ground and background to create depth in his compositions, along with his iconic matchstick figures and love of industrial buildings. In his time, Lowry’s landscapes were criticised as being child-like, dull and uninspiring as he broke the norm and painted what he saw, without any idealising or romanticising. He saw it for what it was, a busy industrial landscape filled with daily life, and he captured this with his personalised palette of only five colours, Prussian blue, vermillion, yellow ochre, black and white.

However, the honest simplicity of L.S. Lowry’s style inspired the children and they transported it into their compositions. They combined their creativity with inspiration from appreciating the artworks of the forward thinking (he was the official artist of the Second World War and the coronation of Queen Elizabeth II), modest (he rejected a knighthood) and inspirational (two well-known songs were based on his art). 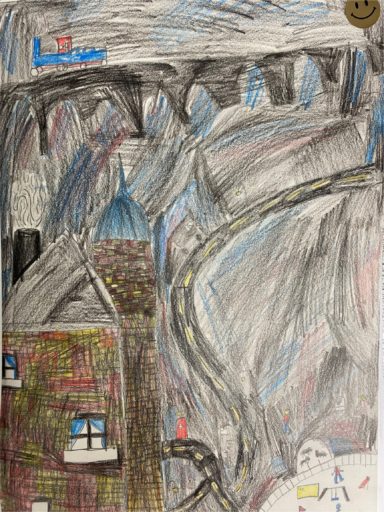