As we come to the end of the Lent Term, here is a summary of the final few games of the Netball season.

On Tuesday 8th March, the U14A Girls’ Netball team, all Third Form students, competed in the Birley’s tournament at The King’s School, Canterbury. Throughout the day we played four, 16-minute matches against Bancroft School A and B, King’s Canterbury and Cranbrook School. Our first match was against Bancroft A, which was our toughest match, with the score being 6-6 at halftime. However, all the girls fought incredibly hard and with Elizabeth Burden, Saffron Roberts and Grace Williams working hard in defence, they managed to take advantage of any mistakes to then gain possession of the ball. This resulted in the final score being 13-10 to SVS.

In our other games, the girls played well together, taking on and applying the great coaching from Mrs Butcher and Miss McConachie resulting in 11-1, 15-4 and 23-1 wins. Rachel Farrell worked tremendously in the centre feeding balls to Pippa Campbell and Tess Hodson who worked the ball up the pitch giving great passes to Alexa Griffiths and me to finish. The team all stepped up and did amazing, resulting in us remaining unbeaten and winning the tournament. A special congratulations must go to Grace Williams who was named our player of the tournament, she played brilliantly in our defence continuously working hard and getting intercepts.

On Thursday 17th of March, the 3rd VII Girls’ Netball team travelled to King’s Rochester for our first tournament of the season. We had a total of seven matches that were ten minutes one way.

Our first match was against St Lawrence College’s first team. Having already played St Lawrence previously in the season and drawing 6-6, we knew we had tough competition. Although the matches were short and fast, we were able to dominate the game with the final score being 10-3 to us.

Our second match was against St Lawrence’s second team. Having previously played their other team in the tournament, we were more confident that we had a higher chance of winning the match but we were surprised as they had extremely fast players and a strong defence. Although we were challenged by our opposition, we were able to draw 3-3.

Our third match was against our SVS U16 team, having played them before in training, we knew their tactics and were able to come out on top winning 11-1.

Our fourth match was against King’s Rochester’s first team. When finding out that our U16 won their match against them, we saw that we had a high chance of defeating them. With our strong shooters achieving goal after goal, the final score was 11-0.

Our fifth match was against King’s Rochester’s second team and having already won three out of four of the games so far, we were feeling confident. After King’s scored the first goal, we knew we needed to make our defence stronger. After changing our positions, we were able to come back stronger and lead the game, resulting in a score of 8-2.

Our second to last match was against Ashford School who had brought their second team, and we knew we needed to come in positive and be strong to win this game. With passionate support from our coach Mrs Kitchen, our final score was 6-0 to us. Feeling confident with the score, we had one final match ahead that would determine our place in the whole tournament.

Our final match was against St Edmund’s School. Although we hadn’t yet played them this season, we knew we had to tightly mark their attackers and score plenty of goals. After lots of hard work, we were able to accomplish a score of 10-2 as the final whistle blew.

After the seven matches, it was presentation time. After seventh to third place had been revealed with our team not yet being called, we became more positive about our place in the tournament. The coaches at King’s Rochester then announced that the SVS 3rd VII team were the overall winners of the tournament, to which we were awarded a medal each. It was a fantastic day, and we are all really proud of ourselves.

The following results are from the King’s Rochester tournament on Thursday 10th March, which the 1st and 2nd VII Girls’ Netball teams took part in:

To finish their last season of Netball at the School, the 1st VII took on a strong boys team.

After a very close game, the girls came away victorious with a 12-11 win! 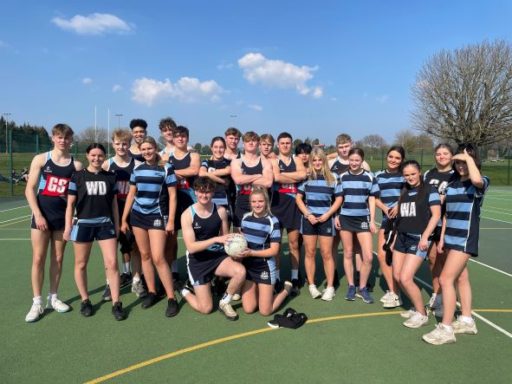