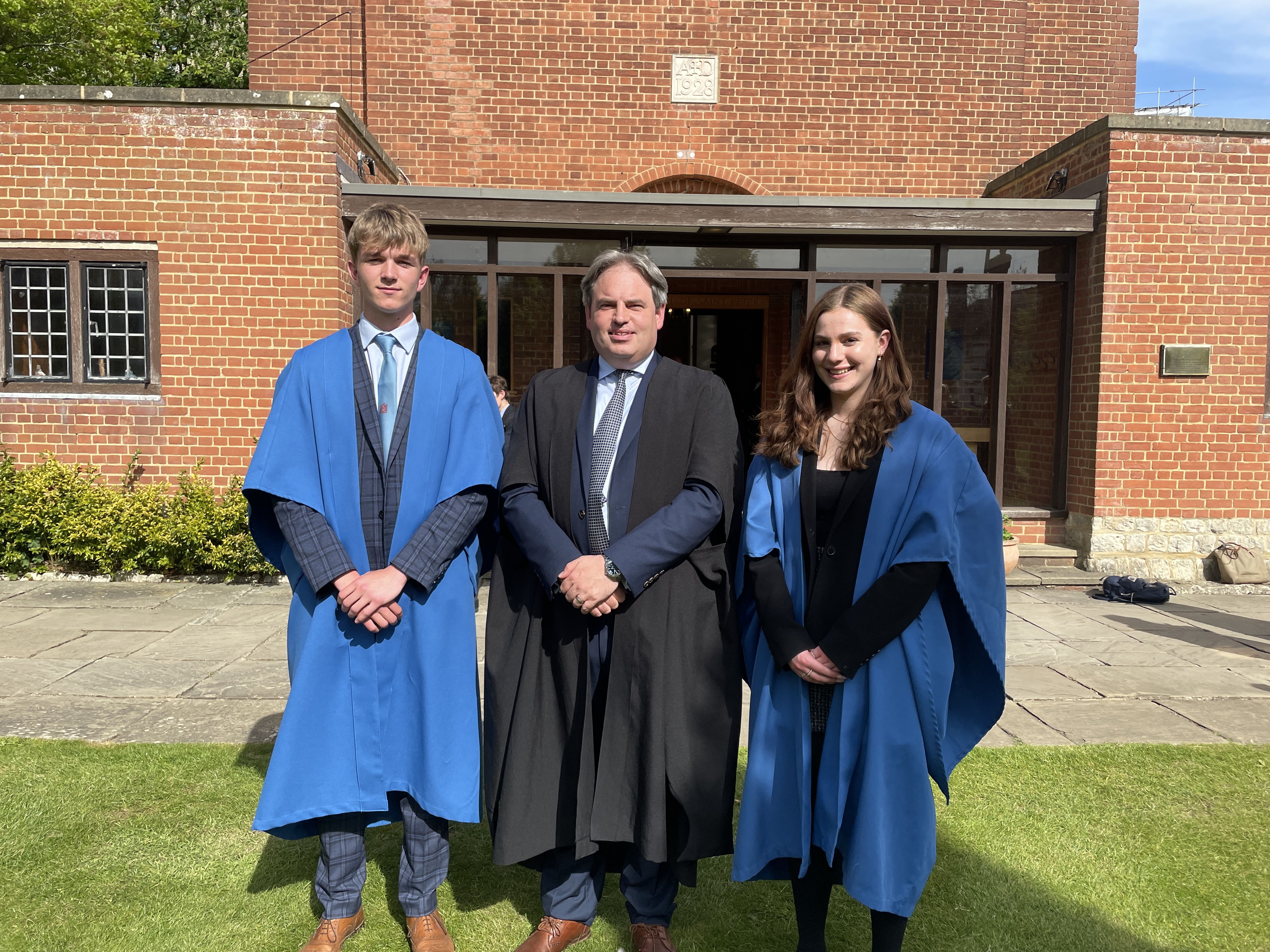 During this week’s assembly, we heard Tobias Butler (Lower Sixth), deliver his Head of School speech. You can read his speech below:

For those of you who do not know me, I am Toby Butler and I have two dogs. I have a black dog called Murphy and I have a brown dog called Dudley. Both of my dogs are labradors but that is where the similarity ends. Their tails wag the same, they both have four legs, two ears, and one nose but Murphy is sensible, reliable, calm, and very loyal. He will always behave himself and do as he is asked. He sits and waits for you to feed him, he sits to have his collar put on, and he would never push past you or jump up at you. Then there is Dudley! Dudley was given back to the breeder at 14 weeks old because the previous owners could not control him. We thought we would be able to train him because of how we had managed to train Murphy. Oh, how wrong we were! Dudley does not have a brain, or if he does, we have yet to find it. He cannot sit still; he constantly pesters for attention, and he continues to pull on the lead – we have tried numerous ways to stop him from pulling but we cannot. If he sees another dog, person, rabbit, or any other living thing, his personality is such that he must introduce himself with the loudest bark. Depending on who he is saying hello to, this can cause amusement, terror or in the case of my grandma’s new puppy, weeing itself on the floor. Dudley however is the most affectionate, inquisitive, loveable but naughty dog. So, I have a black labrador and a brown labrador, but they are not the same.

We are all unique and because we are all unique, we like doing different things. Being different is not a bad thing, not weird, or odd. What matters is that we have fun, that we are happy in ourselves and that we enjoy doing the things that we love. Dudley enjoys chasing a ball up and down the garden whereas Murphy enjoys eating the ball! What matters to me is that they are having fun and I can assure you they do, despite their differences. It would be good if we could all get along like my two labradors.

I urge you to make the most of your time at Sutton Valence School. I know that everyone says that time passes quickly but it really does. I feel like it was only last month I was joining the school for the first time which is why I encourage you to explore as many opportunities as possible whilst you are here. It is a legal requirement that we attend school, but it is not a legal requirement that we enjoy school.

Before I finish, I would like to say that when I heard that I was Head of School, I could not believe it. This will be one of the proudest moments of my life; it is such a privilege to receive this accolade and I cannot thank the school community enough. I have been a part of Sutton Valence School since reception, and if you had told me all those years ago that I was going to be Head of School I would not have believed you. It is an honour and a testimony to the support of my friends, teachers, and family and I thank them for their continued support. I would also like to say congratulations to Hannah for also being chosen as Head of School.

It is a school tradition that I finish with a quote and mine is from Kung Foo Panda said by Master Oogway: ‘Yesterday is history, tomorrow is a mystery, and today is a gift, that is why it is called the present’.

Thank you for listening and have a good weekend.”

During last week’s assembly, we also heard Hannah Slipper (Lower Sixth), deliver her Head of School speech to the School. You can read her speech below:

I hope you have all had an enjoyable Easter break and managed to settle back well. I would like to take this opportunity to thank the Headmaster for trusting me with this role and also congratulate Toby. I look forward to being able to work alongside him and the other prefects this term to give back to the SVS community.

Public speaking was never something that came naturally to me. So, when I was offered this role, my first thoughts inevitably went to this speech and to standing up here today. A few years ago, this would have been my worst nightmare and I had hoped and planned to make it through my whole SVS journey without ever having to stand up here and speak. Unfortunately, for my Third Form self, life rarely sticks to your plans and has a funny way of changing to place you in situations you would once thought never plausible. However, I have found that it is not what the change is that matters most but how you cope with it that really determines the outcome of the situation.

Change is something we are all forced to face on a daily basis. Whether it be as small as having dinner at a different time or as big as the whole world being locked down. And while change can often be for the best – I find that most of the time it does not feel this way and that it is a lot easier to try and hide from it than accept it as the inevitable.

There are two main types of changes I have faced throughout my time at SVS, and I think for each there were very different ways of facing them. The first being the type of change where you must let go and move on. I find this the easier change to hide from – something I have done more than I would like to admit. For me, I have found this type of change most prominent in all types of relationships – both friends and family. Too often I think we tell ourselves that people are going to change, or convince ourselves we can change another person. I think that in these situations I have learned that nothing in life is permanent and things and people are going to come into your life but also go and by not resisting these changes, you enable yourself to grow.

The second type of change is one that is impossible to ignore. The type of change that forces you to alter all of your plans and is something you often did not see coming. This Easter, I made the mistake of going up to the Lake District to attempt to do my gold Duke of Edinburgh – do not get me wrong, I did not expect this to be easy or enjoyable but it was an experience that did really show me that life never sticks to your plans. From walking in a blizzard unable to breathe – this was probably mainly due to my lack of fitness but I would also like to partially blame that I unknowingly had Covid at the time, to one of my friends paralyzing her arm – I have been assured that it is fine now. It is these unexpected changes that ultimately teach you the most important lessons. Having the ability to adapt and think on your feet is something that is so important and a skill which I have learned during my time at SVS.

As is tradition, I would like to end on a quote by Mike Tyson, “everyone has got a plan until they get punched in the face” – life is going to punch you in the face a million times it is how you get up and deal with it that determines the outcome.

Thank you for listening.”